Home NEWS Abdul Rehman Makki, dy chief of Lashkar-e-Taiba, designated ‘global terrorist’: Who is he, what this means 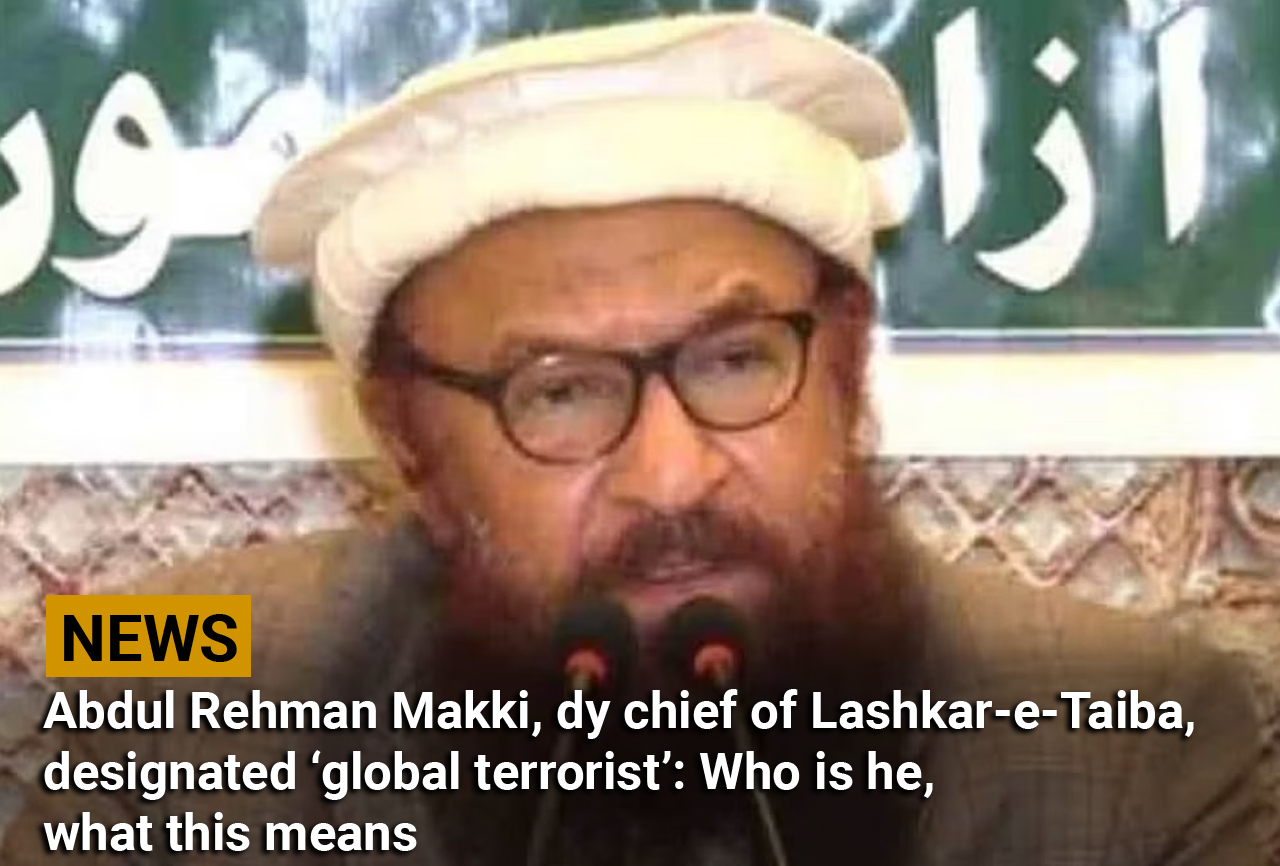 The UN Security Council’s 1267 Al Qaeda Sanctions Committee added Pakistan’s Abdul Rehman Makki, the brother-in-law of Lashkar-e-Taiba Chief Hafiz Muhammad Saeed, to its list of designated terrorists after China withdrew its hold on a joint proposal by India and the US.

Pakistan-based Abdul Rehman Makki, the deputy chief of the terror outfit Lashkar-e-Taiba, has been blacklisted as a global terrorist by the United Nations. He is the brother-in-law of Hafiz Saeed, the founder of Lashkar-e-Taiba.

The UN Security Council’s 1267 Al Qaeda Sanctions Committee added 68-year-old Makki to its list of designated terrorists on Monday, after China withdrew its hold on a joint proposal by India and the US. Individuals and entities in the list are subject to the assets freeze, travel ban, and arms embargo.

Who is Makki, and what were the previous attempts to blacklist him? We explain.

Who is Abdul Rehman Makki?

Makki was mainly known for his proximity to Hafiz Saeed, until the latter was jailed in 2019 for 35 years. He continues to front for him now, as he had in the past when the LeT/Jamat-ud-Dawa (JuD) leader, listed by the UN Security Council as a terrorist after the 2008 Mumbai attacks, went in and out of house arrest.

The sanctions committee said that while Makki has held his leadership positions within LeT and JUD, the LeT has been responsible for or had involvement in prominent attacks, including the Red Fort Attack in which six terrorists stormed the Red Fort on December 22, 2000, and opened indiscriminate fire on the security forces present.

Makki too uses the title of Hafiz, an honorific for someone who has memorised the Quran, as well as the title of Naib Emir of JuD. He would also be present at court hearings of Saeed’s petitions challenging his detention. Known to be a fiery speaker, Makki has been a regular at the February Kashmir Solidarity Day rallies in Islamabad. Kashmir solidarity day is officially observed in Pakistan on February 5. At one such rally in 2010, two years after the Mumbai attacks, Makki threatened “rivers of blood” in India for not handing over Kashmir to Pakistan and threatened to seize it by force.

Were there attempts to blacklist him in the past?

In June last year, China had put a hold, at the last moment, on a joint proposal by India and the US to list Makki under the 1267 Al-Qaida Sanctions Committee of the UN Security Council. The proposal to list Makki under the UN Security Council sanctions regime was circulated to all members of the council’s 1267 Committee under a no-objection procedure.

He had previously escaped designation under UNSC Resolution 1267 in 2008, when his leader as well as the LeT front organisation JuD were listed by the Security Council.

But months later, with his speeches threatening violence in India, he earned a place in the US Treasury Department’s list of designated and sanctioned terrorists in November 2010. “Treasury also acted against Hafiz Abdul Rahman Makki, head of LET’s political affairs department, for acting for or on behalf of LET,” it said at the time, adding that he helped raise funds for LeT, including “Approximately $248,000 to an LET training camp and approximately $165,000 to an LET-affiliated madrassa.”

A bounty of $2 million was also offered for information about him. That did not send him into hiding, and he was often seen in courtrooms for Saeed’s hearings even later.

He and Saeed also jointly petitioned the Lahore High Court in 2014 challenging a bounty of $10 million declared by the US for information about Saeed. Even after a conviction in 2020 by an anti-terrorism court in Pakistan, Makki was among the six acquitted by the Lahore High Court in November 2021 of charges of terror funding through a LeT front organisation. The Counter Terrorism Department of the Punjab Police in Pakistan had filed over 40 cases against several members of the JuD, including Makki and Saeed.

The India-US attempts to designate Makki came at a time when the Financial Action Task Force, a watchdog organisation meant to check terrorist financing and money laundering, was considering removing Pakistan from its grey list (signifying failure in curbing these problems) after several years. The FATF commented on improvements in Pakistan but highlighted the need for sanctions on Saeed and others. In October 2022, Pakistan was taken off the grey list.

India said at the time, that “as a result of FATF scrutiny, Pakistan has been forced to take some action against well-known terrorists, including those involved in attacks against the entire international community in Mumbai on 26/11.”

What is the 1267 Al Qaeda Sanctions Committee?

“On 16 January 2023, the Security Council Committee pursuant to resolutions 1267 (1999), 1989 (2011) and 2253 (2015) concerning ISIL (Da’esh), Al-Qaida, and associated individuals, groups, undertakings and entities approved the addition of the entry specified below to its ISIL (Da’esh) and Al-Qaida Sanctions List of individuals and entities subject to the assets freeze, travel ban and arms embargo set out in paragraph 1 of Security Council resolution 2610 (2021) and adopted under Chapter VII of the Charter of the United Nations,” the UN said in a statement on the latest designation.