Home Uncategorized A quiet revolution: the female imams taking over an LA mosque 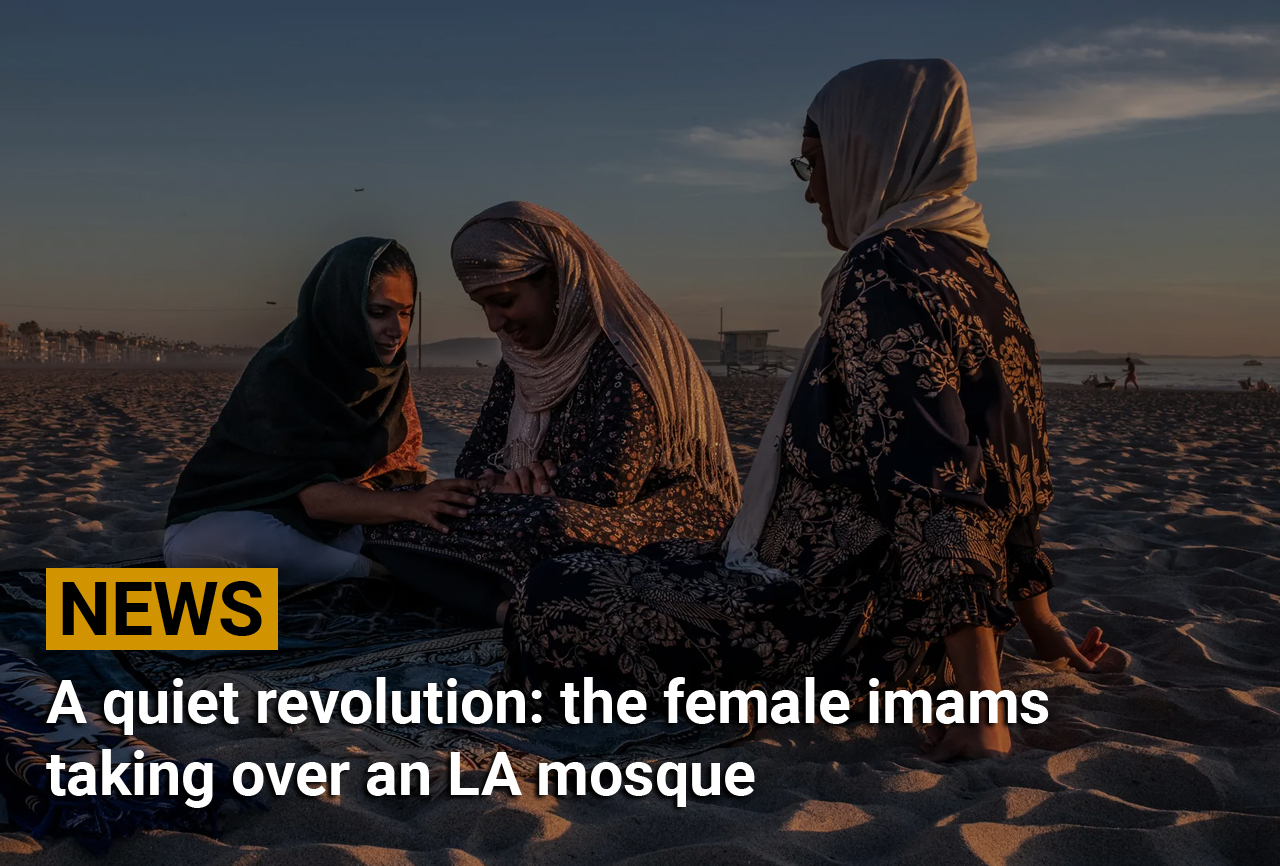 While many have misinterpreted a hadith to mean women can’t enter a mosque, these women are covering progressive topics like sexual violence, abortion, pregnancy loss, domestic violence in their sermons

when Tasneem Noor got on the stage at the Women’s Mosque of America in Los Angeles, she felt butterflies in her stomach. Facing about fifty women on praying rugs, ready to deliver a sermon – khutba in Arabic – she took a deep breath.

During the prayers, the women would follow Noor’s lead, but several would pray four more times after it ended, to make up for any potentially invalid prayers. That is the result of a 14-century-old disputed hadith that leads some to believe women are forbidden to lead prayers and deliver sermons.

“I don’t mind,” Noor told me later. “Some people function better with rules.”

Noor, 37, is part of a quiet revolution in America: at the all women’s mosque, she was celebrating its five year anniversary of practicing the female imamat, a rare and often controversial practice in Islam.

Women aren’t even allowed to pray in many mosques across the world. In some mosques in the US, women may enter, but are often forced to pray in separate rooms – leading some to call it the “penalty box”. Spiritual leaders who have pushed boundaries – by running mixed congregation mosques or running an LGBTQ mosque – have received death threats.

But at the Women’s Mosque of America, women are using their sermons to cover previously untouched topics like sexual violence, pregnancy loss and domestic violence.

One of Noor’s most memorable sermons happened in 2017 – a surprise, considering it was largely an improvisation. After a scheduling hitch left Noor with less than half of the 45-minutes she should have had, she shortened her talk and changed tack: leading the congregation in a meditation.

“She asked us to track our emotions in our bodies, and let them run their course,” recalled Nurjahan Boulden, who was in the audience that day. “I didn’t know it was even possible to own and control your emotions like that, but it worked.”

Boulden had come to Noor’s sermon that day not knowing what she would find. Before that sermon, she was haunted by a destructive guilt she carried.

She grew up with a love for belly-dancing – a practice inherited from her Baloch mother – but also hearing a lot of “if you do this, you’ll burn in hell”. That belief took hold inside her, and began to grow. Then, she was shot in the leg in a nightclub in Toronto in 2006. Boulden, a college student at the time, overheard one of her aunts say, “She was out dancing, what did she expect?”

Then, she conceived a child out of wedlock with her Christian partner. After they married, they had several miscarriages, and so the guilt grew again. She got to a point where she believed her misfortunes resulted from not conforming to religious traditions.

Noor offered Boulden another frame. “I didn’t tell her she was wrong for feeling punished,” Noor said. “I helped her to look at it differently and asked, ‘What else is true?’” Noor told her that God had given her the talent of dancing and that it wasn’t a shameful practice, like many thought. She told her that her intentions – what’s in her heart – is what mattered. If she felt happiest belly dancing, , then dancing was how she was meant to connect with God.

Boulden was in disbelief.

“You’re the guide I had been waiting for,” Boulden told her.

Noor was also in disbelief. She had never seen herself as someone that people had been waiting for.

Noor grew up in a pious family in Karachi, Pakistan. Everyone in the house prayed five times a day. At the time, women weren’t allowed in the mosque in Karachi (although that is now changing). But Noor also had women to look up to: her mother Naima had memorized the Arabic scriptures and was usually the designated prayer leader in the house.Advertisement

In the summer of 2000, when Noor was 16, her family migrated to the US and moved into a townhouse in Culver City, California. On their street, in this upper middle-class suburb of about 40,000 people, old ficus trees formed an archway. There were few Muslims in the town – they represent only about 1% of the population even now – but in the first couple of months after settling in to her California home, she went to a giant prayer for an Eid celebration at the Los Angeles convention center.

She was amazed. It was the first time she would pray in public. Noor wore a blue and yellow salwar kameez she had brought in her suitcase from Karachi, silver earrings with small blue stones that hung down to her chin and two dozen bangles around her henna tattooed wrists. The teenager was mesmerized by the ethnic and gender diversity in the crowd. She saw the power of praying outside the house, in communion.

At UCLA, she stopped wearing the headscarf on campus and felt uneasy at the comments from other Muslim students. “As if wearing the scarf made you some sort of Muslim goddess,” Noor reflected later. She saw it as an attempt at oppression and she was defiant against it.

After graduating, Noor worked at California State University in student affairs for five years. During a social justice workshop, she helped a young gay student come out. She reflected on how, in Pakistan, being gay was portrayed as a deviant “lifestyle” choice. “I believe that they were who God made them to be,” she said.

When the speaker talked to the audience about everyone’s “fascination factors, the thing that lights you up”, Noor immediately thought about her faith. She stepped outside to breathe. Her sister sat next to her on a bench. “It was my calling,” Noor said, the moment she realized she wanted to be a spiritual leader. That night, in her prayer, she begged God to guide her.

“She speaks about faith in a really powerful way that inspires people,” Sheila Merchant, a young Californian lawyer who has been influenced by Noor’s guidance, said. “She created that safe space for me where I could really share and open up and be my whole self.”

Noor’s sister Samia Bano, now 39, was having similar revelations. Unlike Noor, Bano wore a tight scarf over her ears and would never miss a prayer. Certified as a happiness coach, Bano believed her calling was to share with people how she had learned to “find peace and happiness in my life”.

But there was a journey before she arrived at that happiness. At the age of eight, Samia was sexually abused by a relative in Pakistan. The little girl, once bubbly, shut down. She found refuge in silence and in Anne Frank’s diary, a book found unexpectedly at a local market in Karachi. “I realized I wasn’t alone,” she said.

Bano kept the secret. She didn’t receive help until she started college, also at UCLA. On campus, she saw a counsellor and practiced yoga. On her mat, she learned how to stand straight, tall, high like a mountain. She wanted to provide the same for others and became a certified counsellor, working at a hotline for victims of sexual abuse.

“I had guessed something like that had happened,” Noor replied in anger, when her sister finally told her of the assault in 2014. “All of a sudden, you were not the same,” she added. Noor also told her she had guessed who the perpetrator was. Bano, who carried the guilt for years, was relieved. “Tasneem was instrumental in my process of healing,” she said.

When the Women’s Mosque of America opened a year later, Noor and Bano signed up and soon became among the most active members. During her first khutba in July 2016, Noor was so nervous, her voice was shaky. In between many deep breaths, she talked about fear of judgment by others and “ugly stereotypes”. Bano was hired as operations director for setting up prayers. Bano’s first khutba, a year later, was about doing no harm and loving yourself – the Ramadan values that mattered most to her.

The sisters had always meditated together at home. Now, on her praying rug, before prostrating, Bano stood strong on her feet, rock solid, and was committed to challenging the patriarchy she saw in Islam. “It’s not women’s duty to hide, but up to men to lower their gaze,” she said.

Noor and her sister have faced many questions about their choices to become imams.

“Samia, we heard you lead prayers. Did you really do that?” asked a group of women one day outside the Culver City mosque. Bano confirmed it was true. “Oh, so you think it is allowed in Islam?” They challenged.

“Yes it is, I actually looked into it,” Bano replied. Excited to share the information, she took her phone out. She offered to send them videos on the female imamat, if they wanted. They raised their eyebrows and walked away.

Muslim feminists who advocate for female imamat in mixed and non-mixed congregations point to Umm Waraqah – one of prophet Mohammed’s female companions, who led prayers in her house. They say that Mohammed asked Waraqah to turn her house into a mosque, therefore legitimizing the practice of being a female imam today. For some, it is simply not a convincing argument. According to the Fiqh Council of North America (FCNA), female imamat is perfectly permissible in women-only mosques.

Noor, despite changing the lives of many – including Boulden, who is now a full-time belly-dancing teacher – is sometimes less certain about using the word imam, which has traditionally referred to a man.

“I don’t know if I can call myself an imam,” Noor told me recently over the phone.

“Of course you are an imam!” Bano yelled in the background.

“Well, there you go, maybe I am one,” Noor said, laughing. “This is not a career. It is not something I do to make money. This is my calling, my responsibility, as the creation of the ultimate creator.”

In August, I met with Noor at the Islamic center of southern California for the 1pm prayer. It was a Monday and the praying room was almost empty, with only two elderly men praying in the front and a young woman wearing a black abaya in a back corner. We picked a spot near her. Noor and I stood side by side. We waited for someone to lead the prayer but no one volunteered. I asked if Noor could lead me. “Sure,” she said as she straightened her back and took a deep breath.