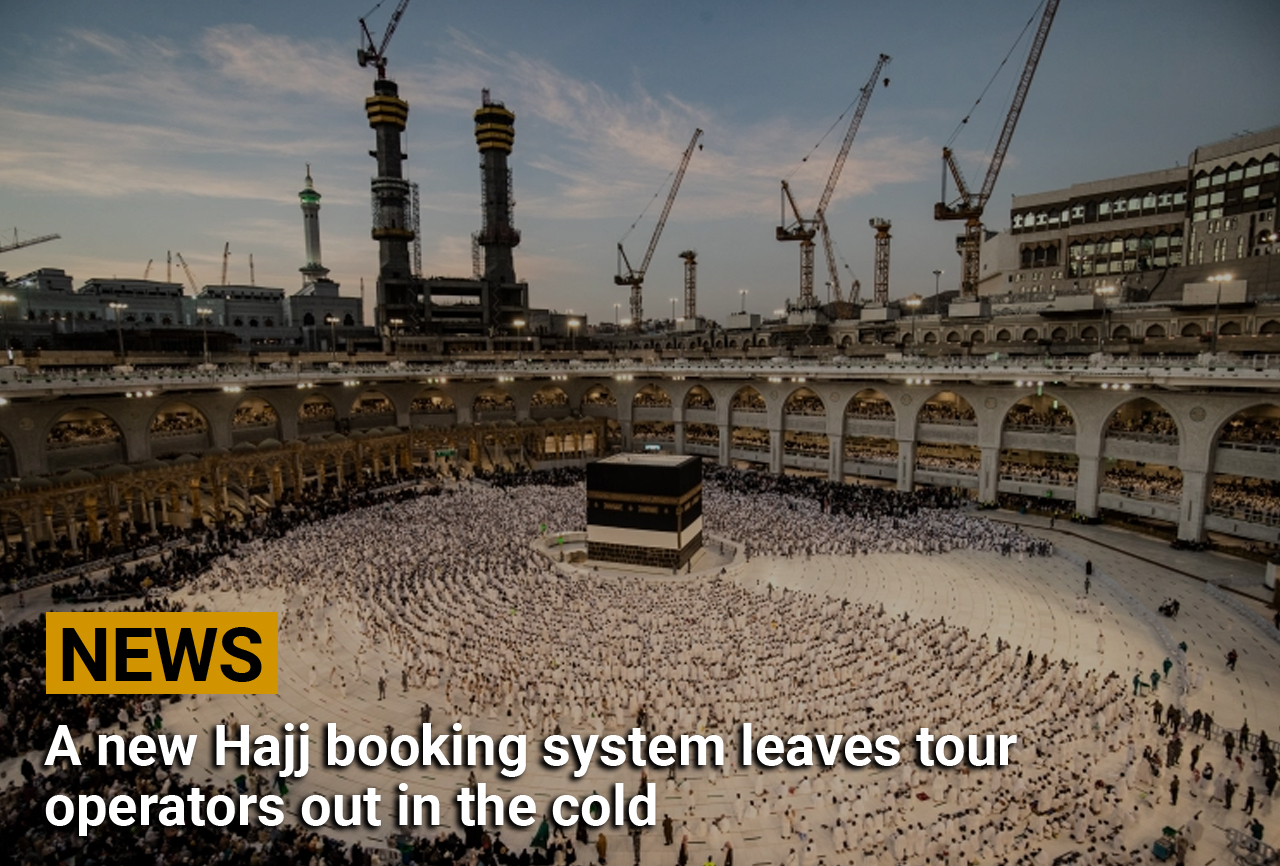 Pilgrims must now book travels via a new online portal which works on a lottery system, cutting out many agents.

As foreign Hajj pilgrims return to Mecca following a two-year absence, the global industry surrounding the annual holy event in the Islamic calendar faces an uncertain future after new rules caused financial and logistical chaos for many travellers.

Last month, weeks before the start of Hajj, Saudi Arabia launched a new online portal, Motawif, via which all pilgrims from Europe, the Americas and Australia must now book using a lottery system. This means longstanding tour operators in those nations could be cut out, even after taking bookings this year.

On average, United Kingdom-based travel operators organise trips for about 20,000 – 25,000 pilgrims every year, but many of them were only informed of the dramatic changes at the same time as the public.

Saudi Arabia’s Ministry of Hajj and Umrah said it had taken the measures to make access easier, keep numbers manageable and fight potential fraud by disreputable agents, claiming an automated, one-stop shop would streamline and safeguard the visa, flight and accommodation processes.

But last week there was mass confusion as many British, European and North American Muslims were left stranded at airports, turned away at their destinations, complained of prices jumping at the last minute, a lack of facilities for disabled and elderly pilgrims, and in some cases, having to share hotel rooms with strangers.

“The Saudi Arabians made a very late and very quick decision, which affected us no doubt”, said Mohammad Arif of Haji Tours in Manchester, a travel agency with franchises across the UK specialising in pilgrimage packages to Mecca and Medina.

“I am not questioning the decision but simply the length of warning. We were only told about the booking system at the same time as everyone else – even though we were an approved company,” he told Al Jazeera.

He said that despite having to shuffle some of his customers into the Motawif system, he was still involved in helping some of them. “I had to ensure wheelchairs for an elderly couple, and people to push them, they’re not set up for that yet.”

“We’ll be thankful to Saudi Arabia if we somehow remain part of the Hajj process from the UK, but we have had to act in a rush.”

The British Labour Party politician Yasmin Qureshi, chair of the All-Party Parliamentary Group on Hajj and Umrah, said she has been in contact with the Saudi government over the rigmarole facing pilgrims from the UK.

She told Al Jazeera: “Despite writing to them many times we’ve eventually heard back that the Saudi government has sent a team to Britain to deal specifically with helping those going to Hajj, and we have some help at the other end at the British consulate general in Jeddah.”

The digital move has been coming for some time, says Seán McLoughlin, Professor of the Anthropology of Islam at the University of Leeds. He told Al Jazeera: “The Motawif system is essentially a third generation of Hajj tour-related business.

“You had independent travellers in the West from the ‘60s onwards after mass migration from Asian and African countries with large Muslim communities, then around the late 1990s – 2000s you started getting bespoke Hajj tour operators in Europe and beyond, and now you have the leap to online.” Since 2006, Hajj visits could only be booked via licensed agents.

McLoughlin has been studying British Muslims’ experiences of the Hajj since the late 1990s and is the author of the report, Mapping the UK’s Hajj Sector: Moving towards communication and consensus (2019). He continued: “Saudi Arabia has been trying to develop a form of religious tourism since the 1990s, and what’s happening now has to be seen in terms of that.

“Though it seems this move may have come about suddenly, it has been on the horizon for some time, and many tour operators probably sensed that but perhaps didn’t know what form it might take.”

The main issue for Haji Tours’ Arif was that as soon as it was announced Hajj was back on, his company started taking bookings, but then he had to refund or rebook many of his clients at the last minute so they could use the new, official channels.

“We repaid any booking deposits, even if money was still owed to us further down the line,” he said, adding that he has sold off some of his property to help pay the refunds. “As our clients are good to us and we want to be good to them, and we have always had good relations with our Saudi partners.

“But you cannot organise a Hajj trip on short notice, you need time, so we reinstated our systems months ago after COVID, such as the apartments we always use in Mecca and Medina – we have used the same people for over 10 years. We were ready as soon as we knew Hajj was on again.”

The turmoil has been felt across the Hajj tour industry globally, with many now facing uncertainty and in extreme cases, a potential end to their business, and in a fragile situation as they carefully negotiate with Saudi officials.

The UK trade association, Licensed Hajj Organisers, in a statement to Al Jazeera said: “Anything we say could be taken out of context and could be considered biased and we do not want to bring Hajj into disrepute.

“We respect the fact that KSA [the Kingdom of Saudi Arabia] is a sovereign country and it has its own rules and regulations which are in place to support its vision of empowering its own citizens. Our thoughts and prayers are with all pilgrims and especially with those from non-Muslim countries.”

There is no question that Riyadh’s Ministry of Hajj is acting in anything other than good faith as it irons out wrinkles to the Motawif system. But, several people and groups approached by Al Jazeera were reluctant to comment or be named, in case they were seen to be criticising Saudi officials.

However, even a week after Hajj began, the tone has changed a little, observed McLoughlin. “I think some of that initial reticence has turned into more open discussion, in that the operators see they can push back a bit and the Saudis are slowly taking on board what they say.”

The lottery system is designed to keep numbers down to one million or under, by comparison with 2019 when 2.5 million Muslims made the journey for Hajj before the coronavirus pandemic hit. But the scheme for 2022 bars those over 65 years old and any Muslim who has completed Hajj in the last five years.

This is obviously bad news for elderly Muslims who have waited, and saved, a lifetime to perform Hajj in their autumn years, but Arif hopes Saudi officials will learn and adapt from how things play out this year.

He said: “Let’s see what feedback we get, that will help the Saudi officials and our industry understand how the future will look. It’s for many Muslims something they have saved for their whole lives, and something they will do only once, so they want it to be perfect.

“Part of the issue is that every Muslim going to Hajj has unique needs, and the online system sometimes may not be able to accommodate that. This is why the bespoke service that Hajj tour operators offer has become so important.”

As well as expanding into personalised high-end Umrah tours – a non-mandatory, smaller pilgrimage that can be undertaken at any time – that personal element may well be a saving grace for the industry, said McLoughlin. “One of the many potential futures for Hajj agents may well be to sell their skills back to the Saudis.”

Parliamentarian Qureshi said the switch to Motawif had been done too rashly, and will have a permanent effect on the Hajj sector in the UK. “They’ve been destroyed, in the UK alone, around 200 or more good operators have had their livelihoods destroyed.”

JEDDAH: British pilgrim Adam Mohammed has fulfilled his dream of traveling to Makkah on foot to perform the Hajj.